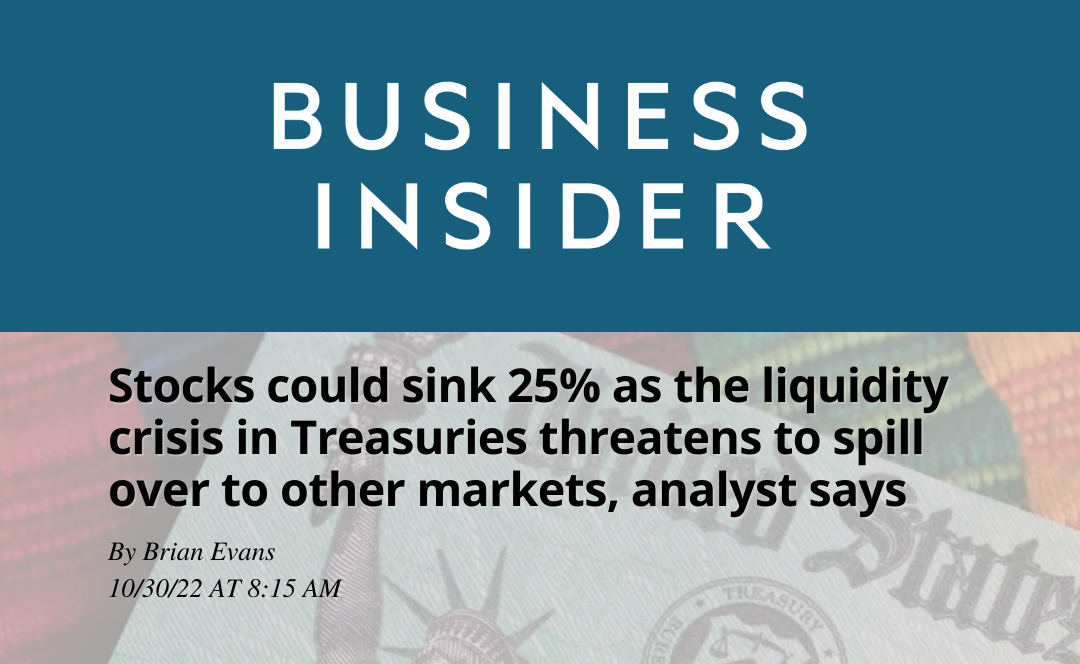 A liquidity crisis is brewing within the $24 trillion US Treasury market, and the turmoil has the potential to sink stocks as well as cripple financial markets more broadly, according to analysts.

Bond yields have seen big swings as a lack of liquidity has widened the price gaps between investors buying and selling Treasuries. That means trades that didn't move the market before are now creating more volatility. Rate-sensitive growth stocks are especially vulnerable as borrowing costs are already rising on Fed rate hikes.

"One has simply to look back at 2008 or the pandemic to understand the seriousness of a liquidity freeze — particularly in the US Treasury market — which is deemed to be the most liquid market in the world," he said. "A liquidity crisis would most likely extend the current bear market in stocks to much deeper levels in the range of a further 20-25% or total of 50% for the year."

The liquidity crunch comes as the biggest buyers of US Treasuries are pulling back. For example, Japan has historically been a top buyer of US debt but has sold dollar-denominated assets recently to prop up the slumping yen as the dollar surges. Meanwhile, the Federal Reserve stopped buying bonds is now shrinking its balance sheet.

And big institutions are less inclined to serve as Treasury market-makers, as the so-called supplementary leverage ratio requires them to put up more capital and boost their reserves.

Analysts expect the government to take some action. OANDA senior market analyst Ed Moya said the Treasury Department will have to buy back older securities and replace them with larger current ones while the Federal Reserve may tweak its standing repo facility.

Treasury Secretary Janet Yellen recently acknowledged the possibility of buybacks after her department surveyed dealers of Treasuries about a potential program.

The stakes are high, not just for the stock market but across financial markets. Demmert said that high-yield bonds would also likely be hurt, while low-quality fixed income would feel the brunt of the pain.

And according to a note from Bank of America's Ralph Axel, "declining liquidity and resiliency of the Treasury market arguably poses one of the greatest threats to global financial stability today, potentially worse than the housing bubble of 2004-2007."

He added that the spillover effects could also extend to emerging markets as well as consumer and business confidence. And if US Treasury trading ever came to a standstill, then corporate, household and government borrowing in securities and loans would likely cease.

"While this sounds like a bad science-fiction movie, it is unfortunately a real threat that has absorbed a large amount of people-hours over the past 10 years with very little output from regulators or lawmakers," the note said.