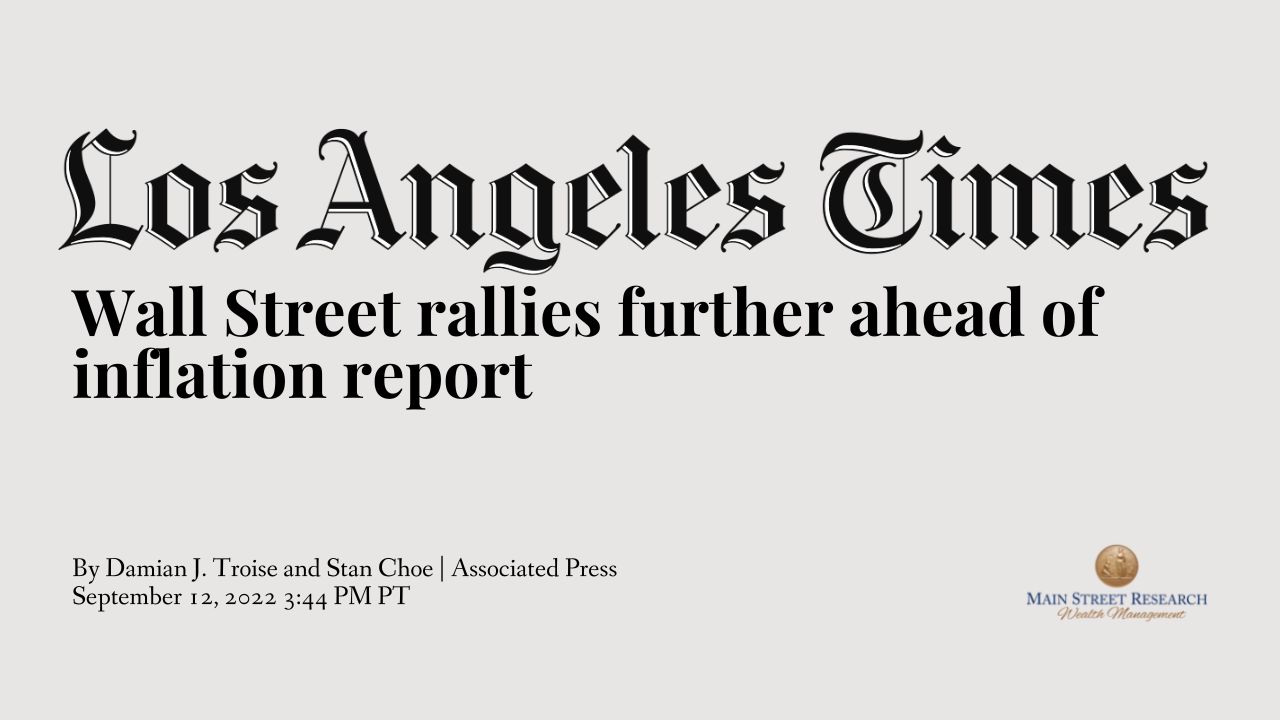 The Standard & Poor’s 500 index rose 43.05 points, or1.1%, to 4,110.41 for its fourth straight gain. That’s its longest winning streak since July, in the early days of the market’s bounce back from its battering earlier in the year.

The nation’s punishingly high inflation and the steps the Federal Reserve is taking to combat it have been the driving forces on Wall Street all year. Economists expect a report Tuesday to show that prices for consumers were 8.1% higher in August than a year earlier, but that inflation was not as bad as July’s 8.5% rate.

A slowdown would bolster hopes that inflation topped out in June at 9.1% and is on its way back down. That in turn could allow the Fed to avoid a worst-case scenario for markets in which it jacks short-term interest rates up to recession-causing levels and holds them there for a long time.

“This week is going to be very telling,” said James Demmert, founder and managing partner at Main Street Research.

Beyond Tuesday’s headliner report on inflation at the consumer level, a report Wednesday is expected to show inflation slowed at the wholesale level last month. A report the following day will show how U.S. households have altered their spending amid high inflation, while a Friday report will show how much inflation households are preparing for in upcoming years.

They’re all crucial data points for the Fed as it mulls over how much to raise interest rates at its meeting next week. Fed officials have loudly reaffirmed recently their plans to raise rates enough to slow the economy, plus their commitment to keeping rates high for long enough to ensure the job is done on inflation.

But with Tuesday’s report possibly continuing a trend, many investors and economists are hopeful that inflation could return to more “normal” levels quickly, unlike in the 1970s, when it took many years.

Jonathan Golub, chief U.S. equity strategist at Credit Suisse, wrote in a report that investors and economists expect inflation to collapse within the next 12 to 18 months.

Markets are fairly convinced the Fed will hike its key short-term interest rate by a hefty 0.75 of a percentage point next week for the third straight meeting. But the hope is that an easing of inflation will allow the Fed to successfully tiptoe the narrow pathway for a “soft landing” of the economy.

That’s when higher rates slow the economy enough to halt inflation but not so much as to cause a scarring recession. Higher rates hurt the economy by making it more expensive to buy a house, a car or anything else bought on credit. They also push down on prices for stocks, bonds and other investments.

Many traders are forecasting the Fed will begin down shifting the size of its rate increases after next week through the end of the year, before potentially keeping rates steady through the first half of 2023.

Of course, such hopes could also be setting Wall Street up for disappointment. The economy has given false impressions on inflation before, with hopes percolating that a peak has passed only to begin accelerating again.

Demmert said the broader market is looking for inflation to not just peak but to start cooling meaningfully. He said the strong hopes for Tuesday’s inflation report probably are “not going to be healthy for stocks.”

Wall Street economists are still split on whether the U.S. economy will fall into a recession next year because of higher interest rates and other factors.

The Fed has raised short-term rates four times this year, and its aggressive moves have helped the value of the U.S. dollar soar against many other foreign currencies.

A strong dollar helps to limit inflation at home by pushing down on prices for commodities and imports, but it can also hurt profits for U.S. companies that have a lot of sales coming from overseas. The dollar gave up some of its gains Monday after slipping against the euro, British pound and several other currencies.

Treasury yields were mixed. The 10-year Treasury yield, which helps control where mortgages and rates for other loans are heading, is back at 3.34%, close to its highest level in more than a decade.

The two-year yield, which tends to track expectations for Fed action, held steady at 3.56%. It remains close to its highest level since before the 2008 financial crisis.

In the stock market, the vast majority of stocks rallied. Energy producers were close to the top of the leaderboard, benefiting from climbing oil prices.

Bristol-Myers Squibb rose 3.1% for one of the biggest gains in the S&P 500 after federal regulators approved its treatment for adults with moderate to severe plaque psoriasis.